As a result of the project, a reference implementation of RT-Middleware: OpenRTM-aist-0.2 and its interface specification were released. After that, standardization of the RTC interface specification was being made in an international standards organization: OMG (Object Management Group: http://www.omg.org), and became OMG official standard specification in April 2008. One of RT-Middleware implementations conforming to the standard is OpenRTM-aist-1.0 released in January 2010.

Research and development for RT-Middleware started as the RT-Middleware project in 2002 and then it was continued as various projects (the following figure) including NEDO's daily life support robot realizing project. 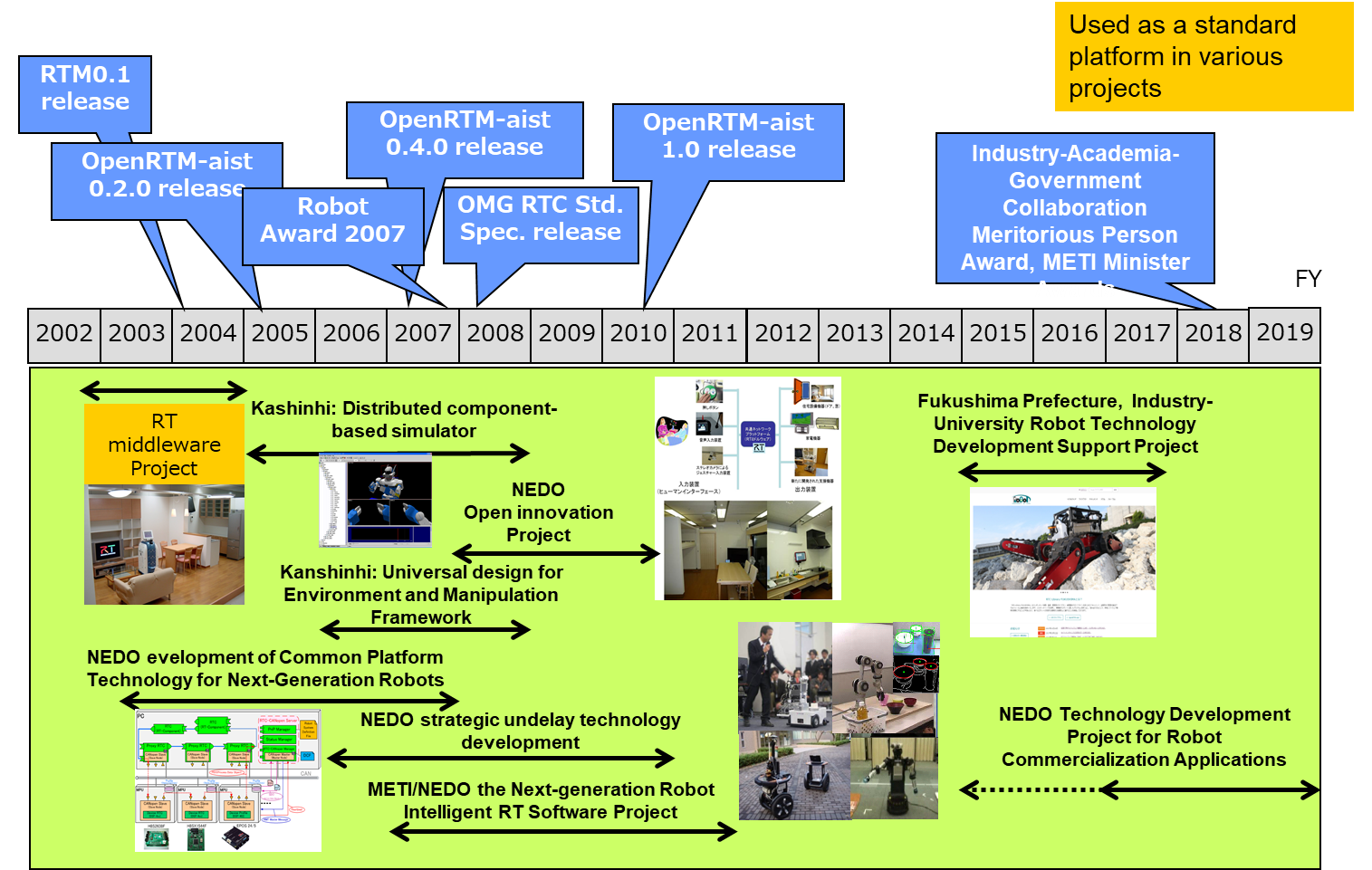 The following shows the overview of our major projects so far.

"Development for required underlying technology for Robot function discovery" project (common name: RT middleware project) is conducted in the 21st Century Robot Challenge Program by New Energy and Industrial Technology Development Organization (NEDO). In this project, the research and the development of Distributed Middleware for robots (RT middleware) were conducted. As a result, a middleware interface specification was developed, and an implementation based on the specification OpenRTM-aist-0.2.0 was released.

The purpose of the project, which was carried out from 2005 to 2007 fiscal year by using the Special Coordination Funds for Promoting Science and Technology, was developing a more effective way to develop next-generation robots by developing a distributed component framework which enables to increase software property for robot and a robot simulator made on the framework. 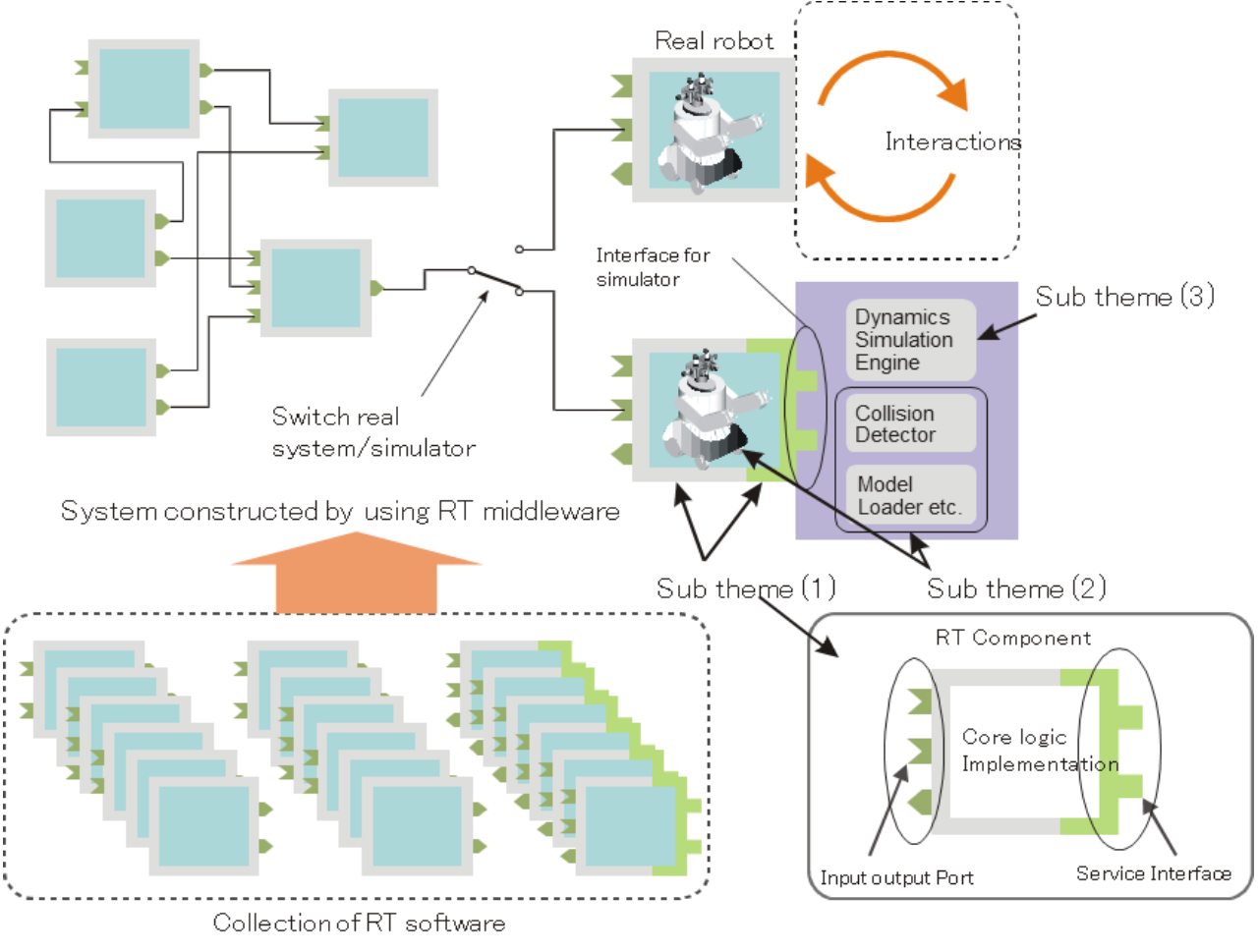 As a result of the project, we integrated OpenRTM-aist and OpenHRP3 which is a robot dynamics simulator. Those were developed separately at AIST.

We developed a target system in the simulator, external controller module, etc as RT components. And we enhanced Execution Context function which is the main logic driving entity of RT component to be usable without the re-compilation of the controller components both on the real system and the simulator.

"Next-Generation Robot Intelligent RT Software Project" (2007 - 2011 fiscal year) by the Ministry of Economy, Trade and Industry and NEDO is a large-scale project that cost a totally of 7 billion yen (forecast) over 5 years. The purpose of the project was making methodology to design/implementation of the next-generation robot and accumulating RT components which can be used in an actual robot system. The components would be developed through the discussion about the re-use method, interface unifying.

Also, a platform called "OpenRTP" was constructed on OpenRTM-aist. The platform is including various tools which can be used in the various development phase for a robot system, a middleware, libraries. The tools were implemented as Eclipse plug-in and it is a toolchain that can allow the user to do a series of work in a single development environment. 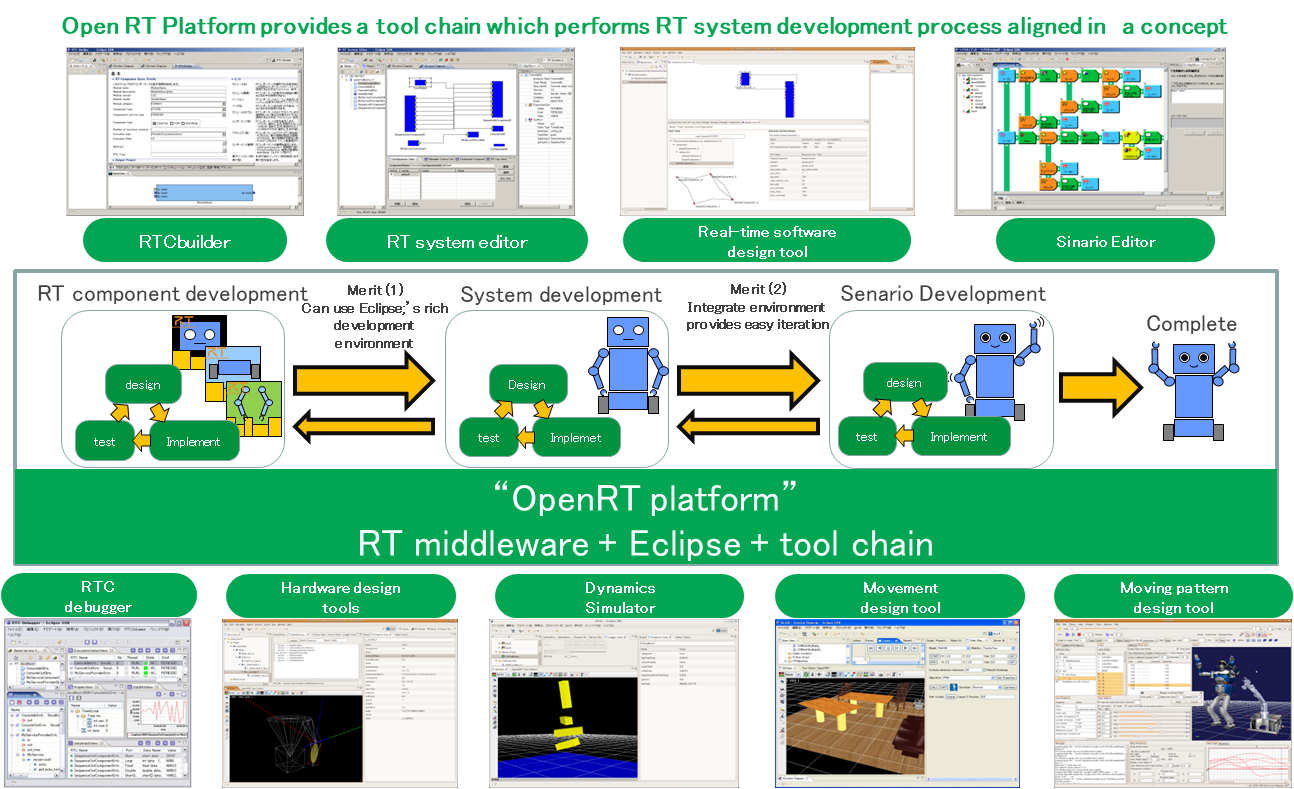 Data between the tools are written with the format which is defined based on the module and system specification description method (defined by UML model and XML schema). This provides better co-working between tools. We also considering to standardize it in the future. Also, we are considering to make the big collection of RT components and the tools open-source and do business with them.

Fundamental Robot Technology-based Open Innovation Promotion Project were funded by NEDO for 3 years from 2008. In the project, to make existing elementally function parts to RT components, the development of cheap and compact base communication module was targeted. Also using the base communication module, an intelligent house in which various sensors and actuators are installed on various parts of the house and the devices are co-worked were built as a POC system.

We are also doing OpenRTM-aist research/development/promotion activity other than the projects.

In The Robotics and Mechatronics Conference (by the Japan Society of Mechanical Engineers) we are holding a lecture yearly base as a tutorial session. Also, several workshop style lectures are being held in various place in indeterminate matter.

The Robot Business Promotion Council is holding RT-Middleware contest as an event in SICE system integration division conference. In the contest, competitions of RT-Middleware based products are being performed.

‹ Flow of RT system development up