OpenRTM-aist is a reference implementation of RT-Middleware which The National Institute of Advanced Industrial Science and Technology - Intelligent Systems Research Institute - Task Intelligence Research Group, has been implementing, distributing, maintaining. The RT-Middleware as well as OpenRTM-aist are the software platforms which divide the various functional components of the robot into the part unit called RT-Component and support the construction of various robotic systems by the integration of various these elements. Currently, in OMG(Object Management Group), these are conformed to the Robotic Technology Component Specification which have been decided.
OpenRTM-aist Java is that OpenRTM-aist for C++ has been ported to Java. OpenRTM-aist Java which has OpenRTM-aist compatible interfaces for C++ enable to use both RT-Component developed using Java and RT-Component developed using C++.

This manual provides procedures for development of RT-Components for Java using OpenRTM-aist Java. This manual targets those who have the basic knowledge of Java.

Here is a list of environments that are required to run OpenRTM-aist Java.


For more details on the installation procedures, refer to "OpenRTM-aist Java Installation manual. Please check the following before moving on to the development procedures
---The version when running "java -version" matches the version of JDK above (Table1-1).

Here we explain on procedures to develop RT-Components for Java. We will use a component with the following specifications as a sample.


Table 3-2 Specifications of the Sample Component

The above MyService.idl is the same as the sample one in the folder of Examples/RTMExamples/SimpleService included in OpenRTM-aist-0.4 Java.

Development Procedure of RT-Component with CUI

First, you generate the skeleton of RT-Component which you would like to develop using rtc-template. The rtc-templates which have used on CUI as well as GUI are distinguished as rtc-template (for CUI) and RtcTmplate (for GUI). (Otherwise, when rtc-template is described simply, it means that it is used as general term of CUI edition and GUI edition.)


Note:When rtc-template is executed in the windows environment, you must enclose in double quotation (") such as "Sample component". When enclose in single quotation ('), the options can't work. Also, the line continuous symbols are need to be modified from (\) to (^).


:By this operation, these files are generated in the current directory.|


Building RT-Component which was created

We will imprement the target RT-Component for development based on the skeleton code which was generated with rtc-template. After implementing, buid RT-Component. In OpenRTM-aist Java, the component can be build on both CUI and GUI. In this section, we will explain how to build on CUI. 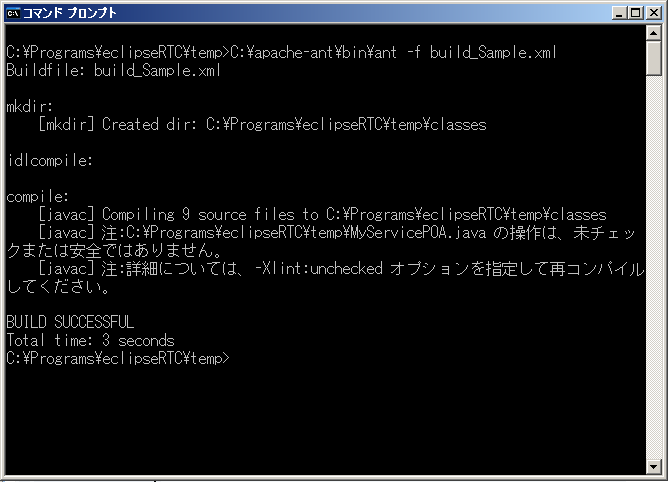 Development Procedure of RT-Component with GUI

Collaboration between RtcTemplate and JDT 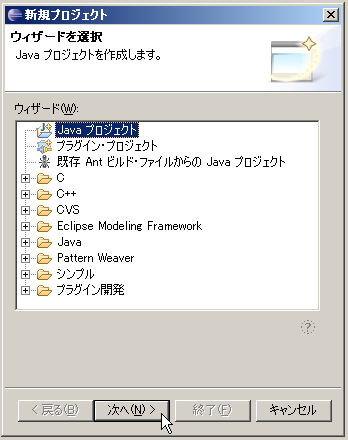 :On the next step of "New Project" wizard, enter "project name" in the dialog box. Check setting of "Compiler compliance level" in "JDK Compliance" is over "5.0" (or over 1.5) and press [Next] button.| 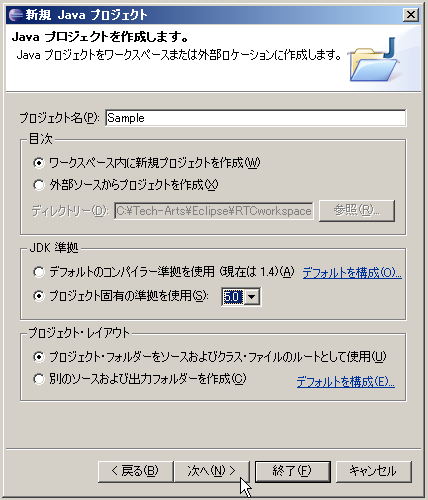 
Set each setting of the creating project in "New Java Project" screen and click on [Finish] button. 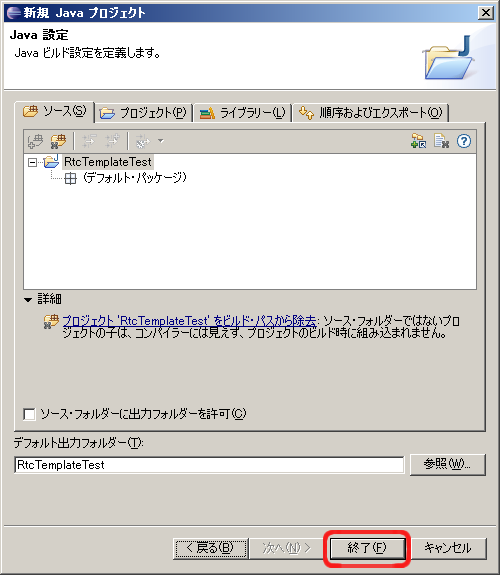 Fig.3-10 Finished by setting each configuration

The specified project is generated and displayed in the "Package Explorer" view. 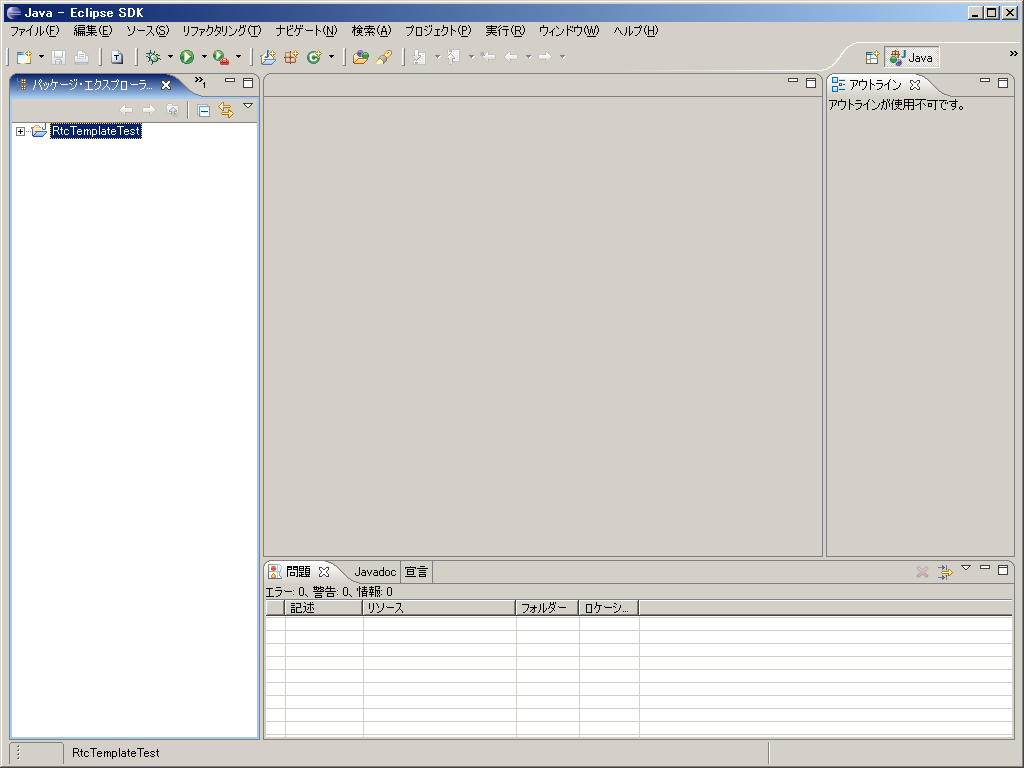 Note: For more details on the options, setting on Eclipse when creating the project, refer to Eclipse website(http://www.eclipse.org/).

:Note:On Windows you must specify a full path for "Output directory", "IDL path:", and so on.|


: By specifying the project directory as "Output directory" field, a variety of generated files are to be added to the project (automatically).| 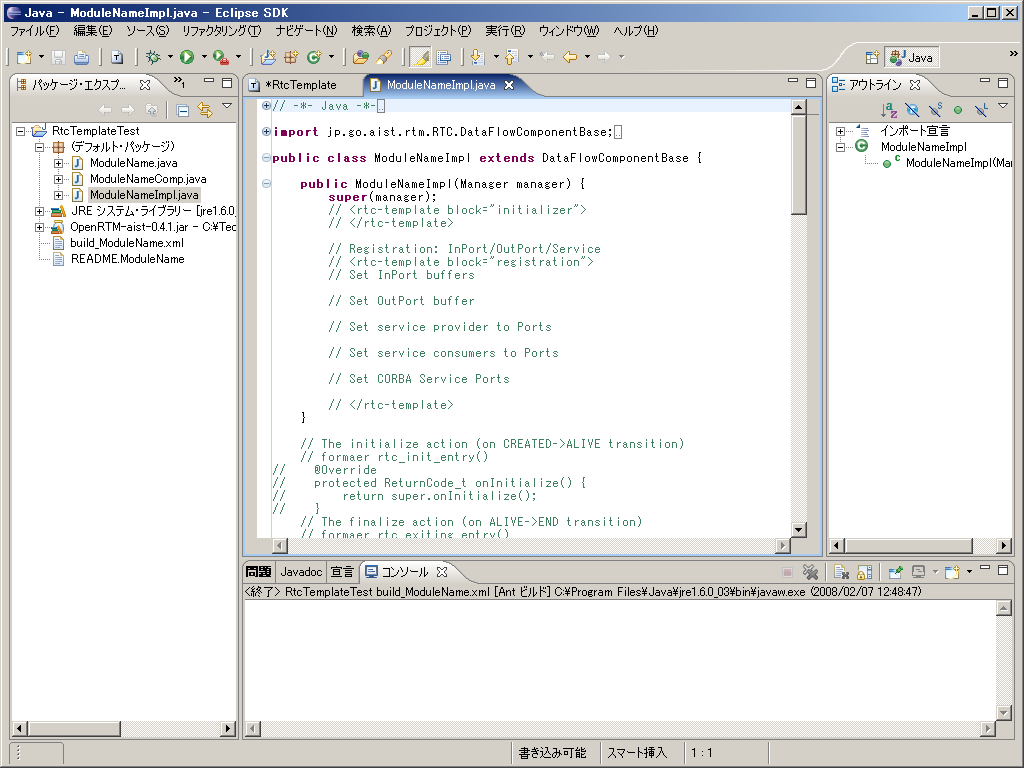 Fig.3-14 Adding a variety of files

Note Even after code generations are finished, sometimes generated files are not reflected on the project at "Package Explorer". To refresh the information, right-click the target project and select [Refresh] from the context menu which is shown. 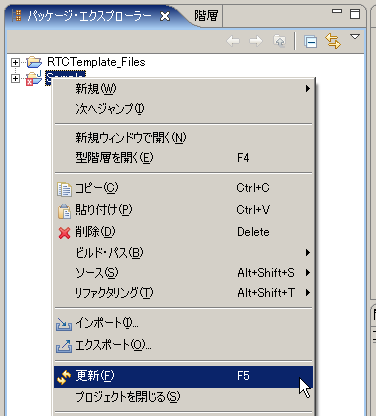 Fig.3-15 Refrech of the shown project

Note In the case of RT-Components which define service ports, errors occur when there are only files generated by Rtctemplate. It is because some of generated files use classes which are generated from IDL files. These required classes will be generated automatically when you build the component. 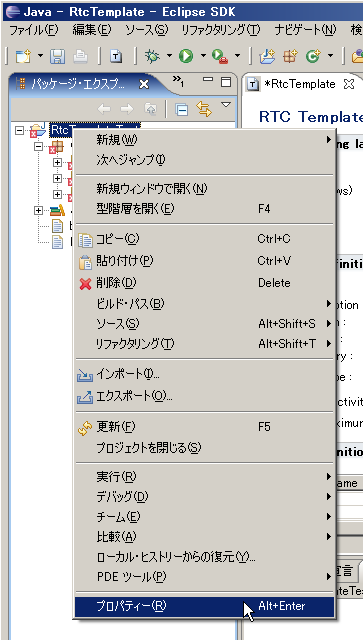 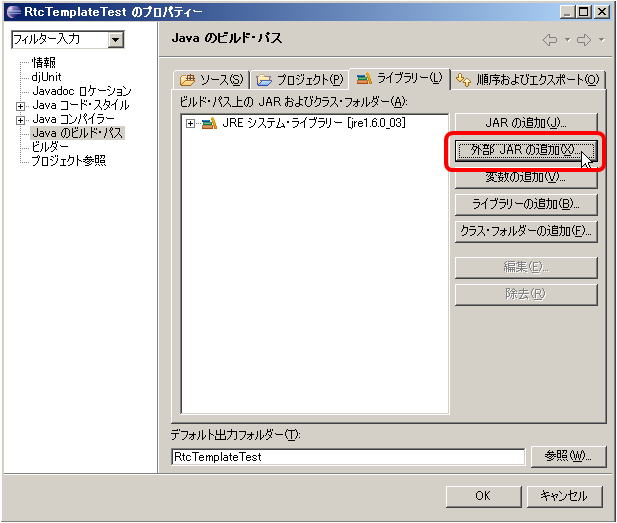 If the build has completed successfully, the class file will be generated in the directory "classes" in project.

Running RT-Component which was created


The above rtc.conf is the same as the sample in the folder of "Examples/RTMExamples/SimpleService" included in OpenRTM-aist-0.4 Java.

Details on RT-Components for Java

Structure of RT-Components for Java 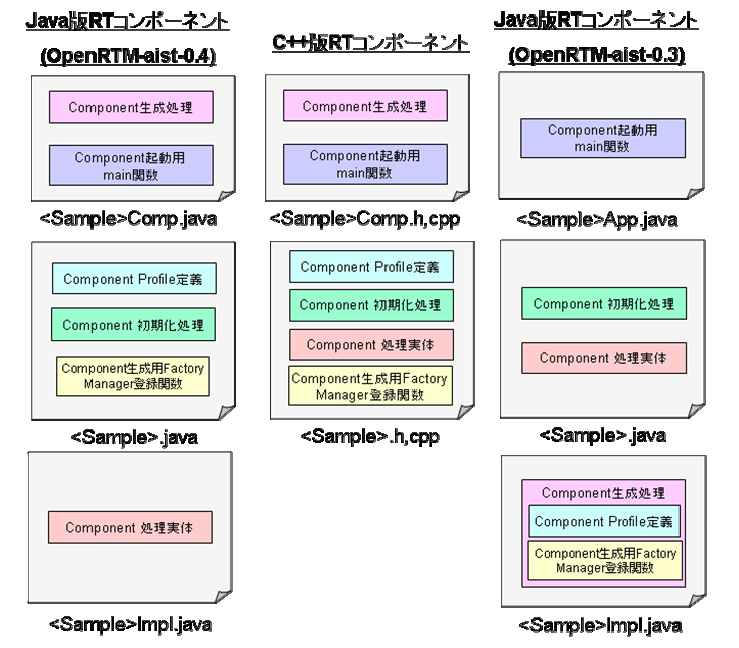 
This change make it mandatory for component launch classes to implement those interfaces.

In OpenRTM-aist Java, Holder class (DataRef Class) is added to pass data. This changes on how to define and use data ports as follows:


For more detail on how to use Data Ports, refer to the samples of "SeqIO" and "SimpleIO".

In OpenRTM-aist Java, the auxiliary variables (<Service Name>Base) for using service ports are added. This changes on how to define and use service ports as follows. For more detail, refer to the samples of "SimpleService".

Holder classes are used for configurations as well as data ports. This changes the way how to define and use configuration data as follows:


Please refer to samples of "ConfigSample", about how to use configuration data.
Table 3-3 shows kinds of holder classes provided in OpenRTM-aist Java to hold configuration data, and their releations with their data types.

Behavior when RT-Components for Java start 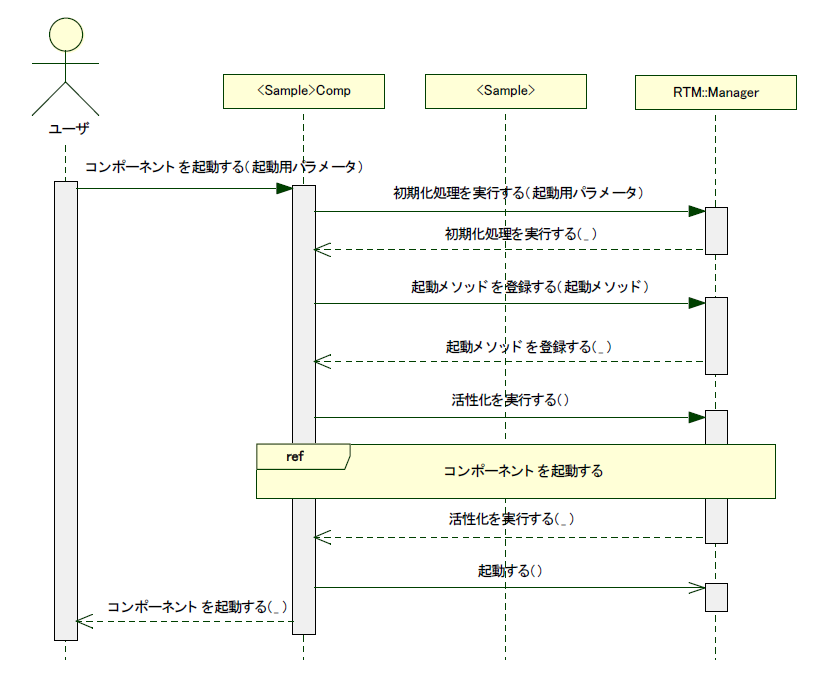 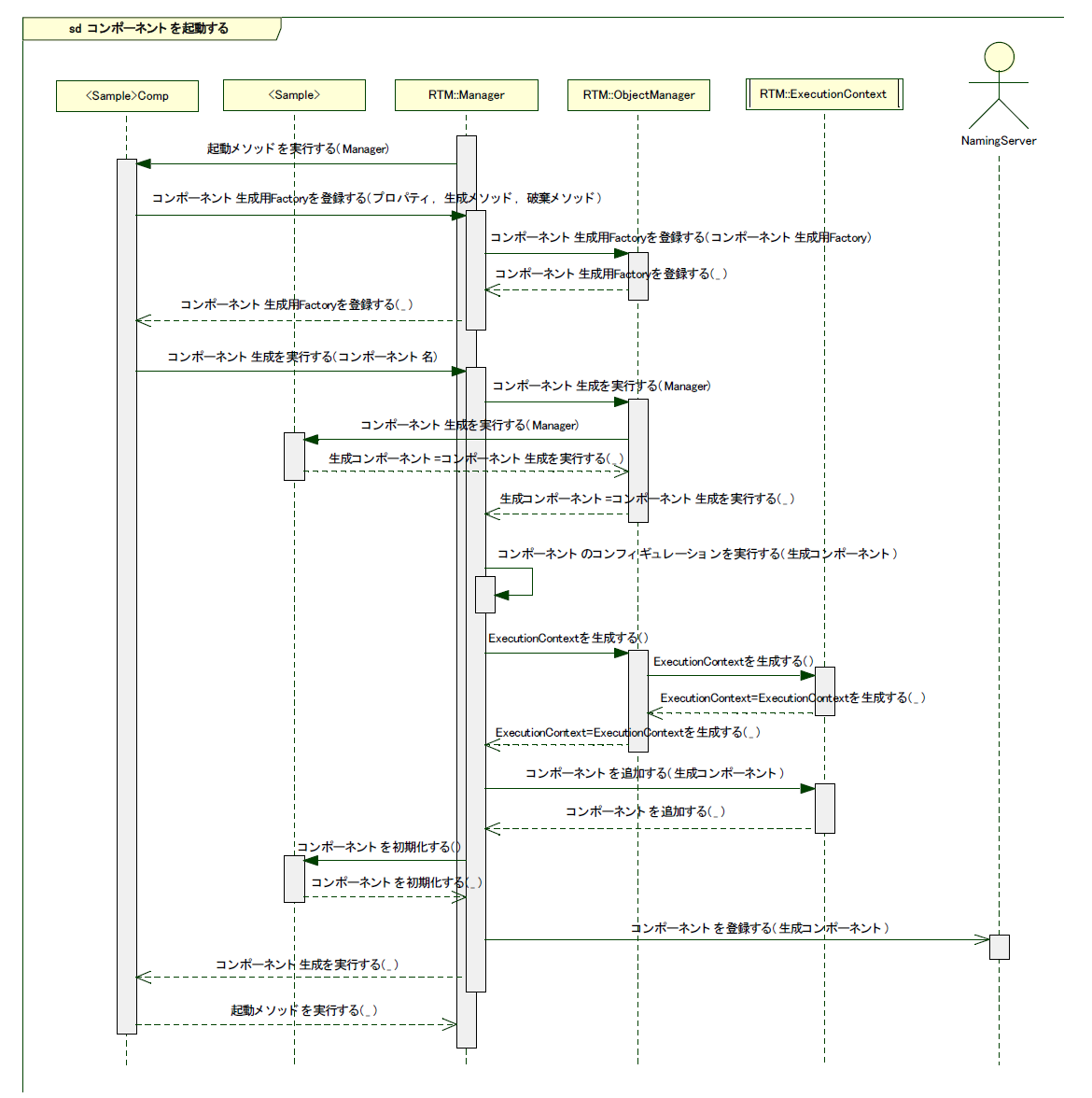 Configuration to Start up Eclipse automatically

OpenRTM-aist Java was developed using the following libraries. We would like to extend out thanks to anyone who was involved in the designing and developing of these projects.
Apache Commons CLI 1.1
This product includes software developed by The Apache Software Foundation (http://www.apache.org/ ).